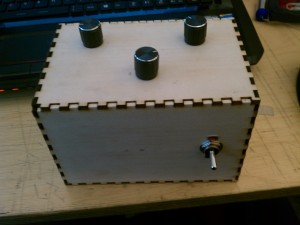 For this project I wanted to explore and play with the idea of user interface a bit. As great as I think touchscreens are in their way…I mean you can’t really have a smartphone without one…I kind of also hate them. I don’t know, they just aren’t very satisfying to use in my opinion. Tapping a screen just doesn’t feel the same as pushing a button, turning a knob, or switching a…switch. So I wanted to create some kind of device that would be all about the way you physically interact with it.

I came up with a box that vibrates until you make it stop vibrating. You make it stop by turning the three knobs on its top surface to the correct spot (randomly determined each time you turn it on). As you get closer the vibrations lessen until they finally stop. So the idea was that you have to physically interact with the box to get it to stop shaking, but this interaction is made more difficult BECAUSE it’s shaking. Okay, so in reality, it doesn’t really shake violently enough to significantly interfere with turning the knobs, but that was the idea anyway.

The Arduino code is pretty straightforward. When it starts up, it picks random values for each of the knobs that are the ‘right’ values that they need to be turned to to stop the vibration. When the knob is as far from the right value as possible, the vibration is set to max, as it gets closer it reduces until it gets to zero. That’s the basic formula, but since I’m controlling 2 vibration motors with 3 knobs, I tweaked it slightly. Motor 1 is actually controlled 2/3 by the left knob, and 1/3 by the middle knob, while motor 2 is controlled 2/3 by the right knob and 1/3 by the middle knob. 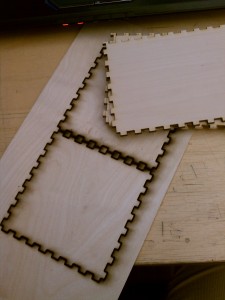 Fresh from the laser cutter 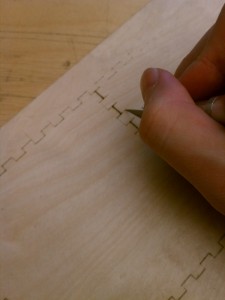 One limitation with the box in its current state is that the vibrations are almost always significantly less than the maximum. This is because the random sweet spot chosen for each knob can potentially be near or even exactly the same as the starting position of the knob. So unless you turn all the knobs to the far left before turning on the box, and then the box chooses the far right for all the sweet spots (or vice versa) the vibration will start out at less than its maximum (and usually a lot less) and go down from there unless you turn the knob the wrong way a lot. A way to fix this in a future version would be to first of all, check to see if the chosen value is too close to the starting value and, if so, choose again. But that would only fix the worst-case scenarios…you’d also want to maybe do something where the difference between the starting knob position and the target position is artificially considered the ‘maximum’ difference, giving max vibration. Then, if the user turns the knob in the wrong direction and the difference exceeds this artificial maximum, you could update the artificial maximum, so it could increase up to the ‘real’ maximum, but never go back down. Another approach would be to make the vibration increase exponentially (logarithmically?) with distance…so that at moderate distances the vibration is close to max, and you have to be pretty close to the sweet spot for it to decrease substantially. You could also combine the two approaches.

Unfortunately, with the current construction, the Arduino is blocked by the vibration motors, clay, the battery holder, etc. so it’s difficult to tweak the program without taking the whole thing apart, which limited how much I was able to mess with it once it was basically working and assembled.

The code is heavily borrowed from the seeedstudio Motor Shield code with some slight modifications: