For this project, I created a tail that clips around your waist, which is controlled by your head movement. The head movement is detected by a dual-axis accelerometer and based on the readings, it directs a servo motor to move which in turns wags your tail.

Fabrication was a real challenge for this project. Some of the issues I encountered were being able to hide the arduino and battery (they sit under a headband and are hidden at the front by a “fur” trim and ears) and hiding wires from the controller and accelerometer to the servo motor, which was located at the back of the belt, just below the waist. These wires needed to allow for head movement without coming apart – an improvement to this project would be elasticized connecting wires.

I also tried a number of iterations for the tail, initially beginning with a segmented wooden snake which I was going to wrap in fur. The snake turned out to be too heavy for the servo motor to operate reliably, and in the end the fur alone attached to a wooden lever was the most successful and best mimicked a tail wagging. 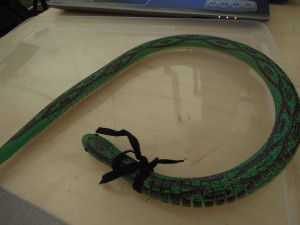 As far as the code goes, I took an existing script for the accelerometer (0-1000) and translated its values to the servo (0-179). I set a baseline of “upright” where the tail didn’t move between -200 and 200 in both directions, and then set conditions for how the tail would move based on the further movement than that. Sometimes the movement of the tail is proportional to the degree of deviation from upright and sometimes it moves to a predetermined position.

Read the Memsic 2125 two-axis accelerometer. Converts the
pulses output by the 2125 into milli-g’s (1/1000 of earth’s
gravity) and prints them over the serial connection to the
computer.

This example code is in the public domain.